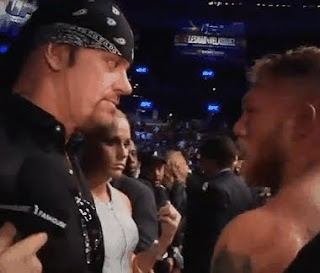 UFC and former WWE man monster, Brock Lesnar, is ready to rock, roll and rumble, this time back into the gaming industry.

The former heavyweight champion (UFC and WWE), along with his manager / agent, Paul Heyman, are also interested in suitable business opportunities, and Australian based media agency, Media Man, took the initiative to test the waters in Asia Pacific via some online media exposure and tactics.

As far as we know, the only time Lesnar has ever actually set foot on Australian soil to date was back in 2002 as part of the WWE 'Global Warming Tour', after taking Hulk Hogan's spot on the card, Lesnar having injured Hogan's back (so the storyline went). Hogan didn't make the 2002 Australian tour, but finally got down under in November 2009 with his 'Hulk-A-Mania' tour, but that's another story brother... and sisters.

The Minnesota monster, who left the world of pro wrestling to brawl as a pro mixed martial artist, rocketed to pinnacle of the heavyweight roster in the Ultimate Fighting Championships and realised his dream of becoming the undisputed heavyweight champion after only four career matches.

The title reign ended in Lesnar's third title defence, when he was stopped dead in his tracks inside the first round by Mexican American Cain Velasquez.

As Lesnar told the media: "On any given day anyone can beat anyone. It happened to me too".

He's currently on the comeback trail to the UFC following a illness, yet Lesnar has told the press in a number of US interviews that he may be tempted back to the WWE... yes, the pro wrestling circus. Well, we don't really think its a circus, but some detractors do.

Quizzed if he would return to the WWE for one more match, Lesnar told ESPN, "I think under the right circumstances I will."

"I think if Vince McMahon and I were able to sit down at the same dinner table and break some bread that we could come up with some kind of game plan...I think a lot of things have to fall in the right places for something like that to happen."

Lesnar's ties with the WWE media and marketing machine have been re-established with the news that he will feature in their upcoming video game, WWE 12, and he has also featured in a viral video to help promote the launch of the game.

The ex WWE champ has hinted that he'd very much like to take on The Undertaker (Mark William Calaway), who has never lost at the showcase event WrestleMania.

"There's a guy that's been on a winning streak for a long time that somebody needs to step up to the plate and finish the winning streak," Lesnar told IGN.

Shawn Michaels, Big Show, Jake "The Snake" Roberts, Ric Flair and a host other others have all tried and failed. Yes, we know that pro wrestling has predetermined winners, but suspend disbelief with us if you will.

And he had some special words for one of the most popular WWE stars of all time, "Stone Cold" Steve Austin.

"There's another side of me that says if there was a chance for me to come back to fight a guy, it would be the guy that I was supposed to fight that chicken-sh**ted out on me and didn't show up, and that would be 'Stone Cold' Steve Austin."

Lesnar is due to return to mixed martial arts action and face off against former Strikeforce Heavyweight Champion and K-1 Grand Prix kickboxing champion, Alistair Overeem, in a heavyweight superfight at UFC 141. The match will headline the event at the famous American entertainment and gaming venue, the MGM Grand Garden Arena, in 'Sin City' Las Vegas on December 30th. Lesner will be looking for his jackpot Christmas present - the big win.

We can also confirm that Lesnar in interested in other gaming and branding opportunities, perhaps following the lead of fellow monsters Hulk Hogan, Ric Flair, Kevin Nash and the late, great, Andre The Giant. He is also understood to be keen to further explore online gaming opportunities. The Wrestling News Media network is following up for more details. Don't change your dial.