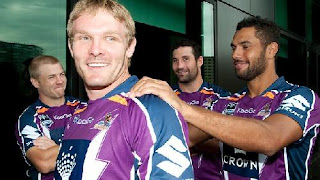 The Melbourne Storm is raking it in, with an extra $1.5 million in with Crown Limited inking as major sponsor for a third year running, while rugby league in Victoria could also benefit significantly.

Thursday's renewal of Crown's only team sponsorship is believed to be valued at $1 million, give or take a few dollars.

The funds boost joins the $500,000 Australian Rugby League Commission chairman John Grant confirmed on Monday would be delivered to all clubs before October 31.

With a back-of-jersey sponsorship still to be sold before the finals, Storm might well collect another payday.

Club chief exec Ron Gauci advised the funds would be used to help expand the code in Victoria, a cause boosted last month with the debut of born-and-bred local Mahe Fonua.

Storm officials aim to fund youth teams down to under-16s and spend up to keep Melbourne "ahead of the pack" with cutting-edge, football-specific technology.

"We'll continue to invest in the organisation. We'll invest both across the football department and administration," Gauci said.

"We want to extend the Storm brand beyond the under-18s and we've put in a proposal to the Australian Rugby League Commission to facilitate the growth of the game in Victoria and now have the funds to help make that happen.

"For us, any investment needs to have a long-term benefit."

The push from the Government-backed Victorian Major Events Company to secure more State of Origin clashes in Melbourne could reap even more cash for local rugby league.

Plans are in place to establish a youth academy, with only the arrival of sufficient funding needed to make it happen.

It's understood that Sydney's South Sydney Rabbitohs management including king bunny, Russell Crowe, are taking an interest in the way The Storm and Crown do things, as you might expect with Rabbitohs also having a sponsorship deal with gaming - entertainment firm - The Star.

The South Sydney Rabbitohs are continuing to enjoy their sponsorship deal with The Star (formally known as Star City Casino).

NRL top brass has said rugby league has benefitted from its association with betting agencies because it allows better access to information about irregular plunges.

As the Australian and globally economy continue to go through tough times its going to be interesting to see if more NRL teams ink deals with Australian casino or gaming firms. I for would would bet yes.

And what's to become of the Barangaroo 6 star hotel and casino development in Sydney? Could they also become a sponsor of an NRL team? With James Packer in the think of the action one would think so. Keep watching this space.

Last week's announcement by Lend Lease and Crown, that they had signed an exclusive agreement to develop a six star hotel at Barangaroo South, has attracted wide ranging media coverage and commentary. Below is a summary of the media releases and media coverage to date.

Following the announcement, the Authority confirmed it will continue to work with Lend Lease, and now their exclusive rights partner Crown, to negotiate a new location for the hotel in Barangaroo South and oversee the appropriate planning applications that must be approved before any concept moves ahead.

Acting Premier Andrew Stoner last week said the development of such a hotel would represent a significant investment in NSW tourism infrastructure, and today’s agreement is a vote of confidence in the NSW economy.

“It is, of course, subject to all the necessary planning and regulatory approvals but Lend Lease already has an existing permit to build a hotel in Barangaroo South and are negotiating with the Barangaroo Delivery Authority to relocate that onshore,” he said.

“The creation of a hotel of this stature would deliver new jobs in construction, off-site manufacturing and the tourism industry, along with hundreds of millions of dollars for the State economy each year.”

“Barangaroo South is a major urban regeneration project that provides a unique opportunity to create a world class commercial, residential, entertainment and mixed use destination on Sydney Harbour. A key part of Lend Lease’s vision for Barangaroo South is to have a high quality international hotel,” said Mr McCann.


*the writer is a shareholder in Crown Limited, Virgin Blue and Ten Network Holdings.