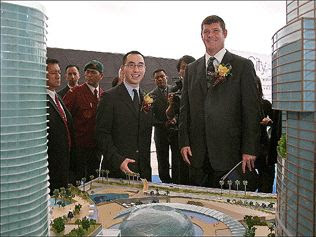 JP's Macau casino joint venture plans to build a massive $US2.5 billion ($2.3bn) casino resort...the group's lucky third in the Chinese territory. This will see them look capitalise on surging gaming revenues in the red hot part of the world.

Melco Crown Entertainment yesterday signed off on a $US360 million deal to gain control of the Macau Studio City project, an "integrated resort project" on hold since the global financial crisis and in planning for more than 10 years.

The firms chief executive, Lawrence Ho, advised the property's theme and demographic target focus would be differentiated from the company's existing Macau property assets, the City of Dreams and the Altira Macau.

Construction is due to start early next year and it is believed the partners have no plans for an equity issue to fund the project.

It will be Melco Crown's second project on Macau's Cotai strip, a vast stretch of reclaimed land situated between the islands of Taipa and Coloane that land based casino developers in Macau, such as Ho and Packer, are promoting as the orient's answer to the Las Vegas strip aka "Sin City". City of Dreams is in Cotai.

The Studio City site is one of the last prime land sites available in Macau for development.

It is located at the Lotus Bridge immigration point, making it the virgin resort that tourists encounter via entering Cotai.

Before the financial meltdown, Melco Crown had a management arrangement with Studio City's owners to run the casino at the site, but elected to take control of the project after it became troublesome for the owners to properly fund it within the prior structure.

Melco Crown is understood to have codenamed the deal Project Eagle.

The deal ends 3 long years of delays caused by legal matters and a range of dramas between the Hong Kong and US investors.

Before the financial crunch, the casino development was to have included a specially designed 4000-seat arena, a 2300-seat theatre, Asia's first "Playboy Mansion" and 4 new classy hotels - a Ritz-Carlton, a W Hotel, a Marriott and the world's first Tang Hotel.

They were rocketed by the opening of Galaxy Entertainment Group's $US2bn resort development at Cotai, which is nearby to the City of Dreams.

Media Man has been speaking to property and gaming experts about the Packer - Macau developments, with 95% believing that the latest Packer Macau project with be a "good to great business and investment".