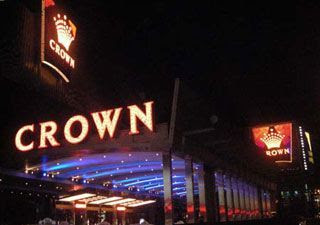 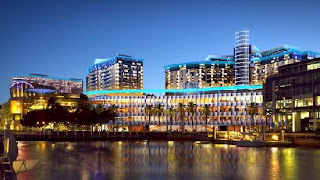 Australian gambling news continues to be all the rage with the Tabcorp - Echo Entertainment deal dominating headlines, now with word that Crown Limited's James Packer is pretty bloody interested in a slice of the action. Yep, word is that Packer smells blood and quite an opportunity, but previously has downplayed his interest. Media Man and Gambling911 go shark and whale hunting in this titanic edition of Australian gambling news...

Australian casino and media whale James Packer will possibly launch a takeover bid for Echo Entertainment. This has caused the casino operator's shares to spike on Tuesday, its first day as an independently listed company.

Shares in Echo Entertainment, which was last week born from gaming firm Tabcorp, jumped as high as $4.52 after reports that JP had snatched up 4.9% of his competitor Tabcorp.

The curious chess move would give Packer a matching stake in Echo, which owns Sydney's famous and rather controversial Star City casino.

Echo shares dropped back in late trading on Wednesday to finish at $4.36, giving the new kid on the block a market capitalisation of a cool $3 billion.

Tabcorp shares fell 57% to $3.35 Wednesday, a flow on effect from the removal of the company's casino assets. We told you there's money in casino products and services Casino Jack.

Now we learn that in a note to clients last Friday, Merrill Lynch analyst Nathan Gee named Packer's Crown group as the most likely company to mount a takeover bid for Echo, but advised there was unlikely to be any action until next year.

Gee estimated a Crown takeover would unlock $600 million worth of value in the combined group, comprised of cost savings and high-rolling VIP aka "whale" revenue.

But he said any move would be unlikely before Echo rolls out its $960 million Star City redevelopment, due to be finished by the end of the year or early next year.

Holding off on a takeover bid would enable Crown to see whether the extra investment in Star City had paid off and avoid distracting casino management, he said.

"The Star relaunch in late 2011 will be a critical time for Echo management, so we think it makes sense for bidders to allow management to concentrate its efforts on maximising the impact of the relaunch, rather than being distracted by corporate activity," he said.

Packer does not appear among Echo's top 20 shareholders, filed by the company with the stock exchange yesterday.

NAB subsidiary National Nominees has emerged as Echo's No.1 shareholder with 17.9% of the company.

The bank's stake in Tabcorp has been hovering around the substantial shareholder threshold of 5 per cent for months.

Since January, it has filed 31 substantial shareholder notices with the ASX as its stake rose and fell above and below 5%.

Companies controlled by HSBC and JPMorgan are Echo's second and third-largest shareholders.

Fresh from closing one of the biggest e-commerce deals in Australian history, the Melbourne brothers behind a daily deals website say they will use the backing of James Packer and other investors to launch two new sites. Just don't mention the impending lawsuit, which could see the Australian company and its new investors embroiled in a grisly court case with the US giant of the daily deals industry, Groupon. Gabby and Hezi Leibovich today confirmed they had sold a 40 per cent stake of their online retail business Catch Of The Day to a consortium of leading Australian businessmen - including Packer of Consolidated Press Holdings, Andrew Bassat of Seek and Glenn Poswell of Gannet Capital - and New York-based investment manger Tiger Global Management. The deal nets the brothers $80 million, which they say they will use to launch two new sites: one in the grocery space and one in the apparel fashion space. The business already operates two sites: Scoopon.com.au, which lists a daily deal which a certain number of users must commit to before it goes live, and Catchoftheday.com.au, which lists items for purchase at low prices. Gabby Leibovich told the press that a chunk of the $80 million received in the much-anticipated deal was in "big suitcases at my grandmother's house". Packer said he was "excited" to align with the "market leader in the online daily deals sector in Australia". However, Leibovich was less willing to comment on impending court cases brought by Groupon, the American giant that has launched legal action against the brothers. The legal action - launched both here and in the US - seeks to enable Groupon to get the Groupon.com.au domain name from the brothers, who purchased it before Groupon did, forcing Groupon to launch under the name Stardeals.com.au in Australia. When asked about the legal battle that could test the laws over cyber-squatting, Leibovich declined to comment. "Let's leave it" he said.

A free music night held at Star City Casino in 'Sin City' Sydney has aroused suspicions from some quarters. The Independent Senator Nick Xenophon says it's an attempt to get young music fans addicted to gambling. He's called for the new venue, the Rock Lily to be moved away from the casino to protect young people. But the casino says the free night is filling an important void in the live music scene and shouldn't be stopped. The presser included: showcase the best Australian music acts plus a number of international performers. It also boasts the largest selection of tequila in Australia, plus an inviting, warm decor which encourages you to "come as you are". So far those top Aussie artists have included Aria award winner Washington and the festival favourite Art vs Science. The gigs held from Wednesday to Sunday are free. John Barwick from Hell City Glamours was interviewed...

"It was actually very awesome. Around 400 people - it was packed. Once there's a couple of hundred people in the place it was pretty kickin'."

"You've got to do the same thing everybody else does who's going there to gamble. You know you've got to go and get your ID checked. You go up the escalators. You've got to walk through the blackjack or backgammon or whatever they hell they're betting on these days. It's a casino. It's definitely a casino".

Victoria's gaming regulator will allow a Bendigo club to install more poker machines. The Kangaroo Flat Sports Club currently has 48 one armed bandits and the Victorian Commission for Gambling Regulation has approved the lifting of that number to 60. Bendigo council has previously endorsed the move.

PartyCasino.com keep the Australian's happy with Robin Hood Mini (Russell Crowe connection) and the oldie but goodie, Goanna Gold. No Underbelly or Kerry Packer themed slots as yet, but Thor, Rambo and interestingly, The Terminator, all enjoyed a spike with Australian and New Zealander players. Similar results in Canada. Bwin.Party Digital Entertainment keep attempting to get back into the U.S, and are watching the online space in the Asia Pacific region very closely, where Centrebet, Sporting Bet and Tabcorp continue to shake things up. Party remains the top online casino brand for Hollywood themed slot games down under.

Down under's top sporting bodies are demanding much stronger laws to safeguard the integrity of their codes against betting corruption, including veto power over "exotic" in-play bets and jail terms for match fixers. The proposals from the Coalition of Major Professional and Participation Sports, which includes the AFL and NRL, will be included in proposals Sports Minister Mark Arbib takes to a meeting tomorrow of Australia's sports ministers on the Gold Coast. "There has been a proliferation in terms of sports betting. We need to ensure that government regulation keeps up with the changes that are taking place," Arbib said. The working group report and recommendations come a week after the NRL announced a crackdown on sports betting and follow Communications Minister Stephen Conroy's announcement that the promotion of betting odds during the broadcast of sporting events would be phased out by June next year.