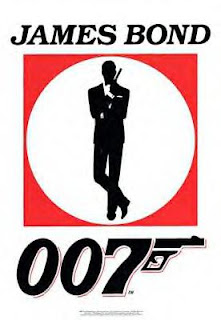 Stars Announced for Next Bond Film...

After being held back for years by significant financial dramas at MGM Studios, the 23rd James Bond film has begun casting in earnest, with Javier Bardem and Ralph Fiennesboth confirmed to appear, according to The Daily Mail. Bardem, who won an Academy Award in 2008 for his villainous turn in “No Country for Old Men,” has been previously quoted by The Los Angeles Times as saying that he was in talks to play the nemesis of Daniel Craig’s 007. Fiennes’s role was not specified. Directed by Sam Mendes and partly financed by Sony, the film is slated for release on Nov. 9, 2012, and is to begin shooting this year.

New James Bond author has created a tipple for fans of the suave superspy to sip as they read his new book, Carte Blanche.

Bestselling writer Jeffery Deaver is getting rave reviews for the book and he mixed up the new Bond cocktail during an appearance on MSNBC's Dylan Rattigan Show on Friday.

The drink, dubbed The Carte Blanche, features a double shot of Crown Royal, a half measure of triple sec, two dashes of bitter and a twist of orange peel.

Bond's traditional tipple has always been a Martini, "shaken not stirred."

Miss Moneypenny, 007's tart-tongued, flirtatious foil, is returning to the James Bond movies in the shape of Naomie Harris. The actress met with Sam Mendes, director of Bond 23, earlier this year and is now in the final stages of negotiations to play the long-running Bond girl -- although, strictly speaking, Moneypenny isn't a Bond girl at all; she's the assistant to Bond's boss, M. Naomie made her name in Danny Boyle's film 28 Days Later, but is known from the Pirates of the Caribbean movies. She did her best work in Sex & Drugs & Rock & Roll, The First Grader (an enjoyable low-budget recent release) and Danny Boyle's National Theatre production of Frankenstein, in which she played the leading lady opposite Benedict Cumberbatch and Jonny Lee Miller. The actress is poised to appear alongside Daniel Craig, Javier Bardem, Ralph Fiennes and Judi Dench when filming begins later this year. The Moneypenny character, who holds the rank of Lieutenant RN, hasn't been seen in a Bond picture since Samantha Bond played her in Die Another Day back in 2002, when she appeared with Pierce Brosnan.

Activision is reloading the golden gun to take another shot at reviving a James Bond video game relic.

The game publisher plans to unveil a new 007 shooter based on the 16-year-old Pierce Brosnan flick, "GoldenEye," at a news conference later this month, said a spokeswoman helping organize the Activision event.

The formal announcement is to take place on July 20 in San Diego at the annual Comic-Con expo. There, Activision will also show upcoming games in the "Spider-Man" and "X-Men" series.

The next Bond film, which is codenamed Bond 23, is scheduled to open in theaters on November 9, 2012.

"GoldenEye" was neither the highest grossing nor the most memorable Bond movie. But the "GoldenEye 007" game resonates with many people, even today.

In the late '90s, the four-player shooting game was part of a nightly ritual at many college dormitories and after-school meet-ups.

Rare, which created "Donkey Kong Country" and was later acquired by Microsoft, developed the cult classic, and Nintendo published it exclusively for the Nintendo 64 console.

Rare's and Nintendo's divorce, along with Activision becoming the exclusive rights holder to develop Bond games, has spun an elaborate web that has left the original "GoldenEye 007" landlocked. Nintendo and Microsoft have been unable to come to terms on how to redistribute the game.

But the "GoldenEye" name, story and characters hold a special place in many gamers' hearts. Seeing that opportunity, Activision remade the game and released "007: GoldenEye" for Nintendo's Wii in November. Developer Eurocom replaced Brosnan's likeness with that of Daniel Craig, the current Bond actor.

The Wii is not typically associated with first-person shooter games, and the "GoldenEye" reboot didn't necessarily break that mold. But Eurocom has said it was satisfied with the sales.

Treyarch developed a recent Bond game, based on the "Quantum of Solace" film. Most recently, it made "Call of Duty: Black Ops." Treyarch was not tapped to make the upcoming "Call of Duty: Modern Warfare 3," and it has not said what its next project will be.

Game industry watchers suggest the new "GoldenEye" will be released on the Xbox 360 and PlayStation 3, two systems where shooting games have thrived.