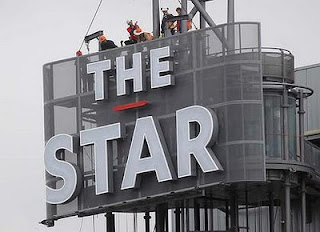 Times are a changing.

Echo Entertainment, with a capital E for entertainment, and its The Star (no longer Star City Casino)...red headed stepchild... are in some talks with James Packer's Crown Limited about... you guessed it - poker machine cap limits. The fierce rivals have found some common ground, or is it more about bit of a common enemy.

The "Aussie casino wars" as they have been described in gaming business circles have taken on a bit of a new angle, with Australia's 'Big Brother' government cementing itself on the battlefield, taking fire from Echo, Crown and the Liberal - National coalition party. One Media Man news-hound joked "It's bigger than the release of Call of Duty 3. They should be an Aussie casino war videogame".

There's been some good news for Echo coming out of its AGM. The integrated entertainment complex and land based casino owner advised revenue was stronger in the first quarter of 2011-12 and earnings are tipped to surge in the second half.

Mr Packer, perhaps a touch busier than usual, thanks to both his AGM in Melbourne, friend Shane Warne doing his thing with Club 23 at the casino, and insider, golf champ Tiger Woods doing his thing in and around Burswood Entertainment Complex in Perth, got to share his mind to shareholders (this writer being just one of them).

The famous Australian gaming billionaire showed his interest competitor Echo Entertainment, of which Crown Ltd snatched a 4.9 per cent stake in the Tabcorp spinoff last June.

Speaking on behalf of Crown at Echo's shareholders meeting yesterday, long-time Packer confidant, Guy Jalland, quizzed the Echo board whether its talks with NSW and QLD governments had covered ridding Echo's ownership caps which currently limit investors to a 10 per cent stake.

"At the time of the demerger that matter was raised with governments of each of those jurisdictions," advised Echo Entertainment chairman John Story. "Each government indicated it wished to continue the current caps."

Mr Jalland went on to ask whether these ownership caps are in the interests of shareholders.

"It's up to the government to determine that outcome, that's not of our making," said Mr Story.

After the meeting, Echo chief exec Larry Mullen, was probed about if there was any discussions between Crown Limited and Echo Entertainment to which he disclosed that the two outfits have only had talks on common business issues such as the new poker machine regulations.

It's clear that on this point Packer's Crown and Echo (E for Entertainment) have evidently found common ground, if not a common target.

Story stayed on message as JP (that's James Packer) when he railed against the pokie reforms and how it would hit the casino and gaming industry at a time when Echo and Crown are spending a combined $4 billion on new "tourism infrastructure"...that's including the redevelopment of Echo's flagship Sydney land based casino, The Star.

He advised the tipped reforms (pre-committing being a big part), "are unproven and untargeted proposals, which are at risk of adversely impacting the casino and tourism industry without the desired improvement in the occurrence of problem gambling." He said they along with many members of the casino sector are in talks with the government to find a more effective solution.

Swinging back to the Echo AGM, Mullen told investors that trading for the current financial year was in line with expectations and "solid" given the cautious consumer environment and disruptions from its redevelopment program.

Mullen pointed out that while benefits of the redevelopment of The Star will be evident from this quarter, earnings for the half year will be impacted by $30 million worth of pre-opening costs and higher initial operating expenses.

Even in the casino business, you have to sometimes spend quite a bit of money to make money, and the stakes are often higher for the casino company than for the punters that might come in to try their luck on Cleopatra, Sinatra, Monopoly, Wheel of Fortune or any other one of hundreds of game titles.

Media agencies such as Media Man and Casino News Media are currently obtaining information from the public at large as to whether The Star or Crown Casino are seen at number one in Australia as well as if both casino groups are more about gambling or entertainment, or both. Information gathers and analysts at the likes of Roy Morgan and the Australian Government are expected to be very interested in the findings.