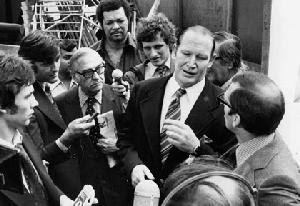 Next year the Nine Network will be counting on on a TV mini-series about the late media and gambling mogul's life to deliver the massive ratings it needs to snatch back its former glory.

Unveiling its biggest investment in new television programming in the station's rich history, Gyngell championed Howzat: The Kerry Packer Story as a sure hit for Nine in a year he predicts will be its "best ever".

Staring down the gun barrel at an 18-month deadline to recapitalise company debt...and shake-up a rough-ish 2011 ratings performance - the Nine top brass gave his word his network would "deliver across the board" next year.

Confirming $120 million in new programming and business ventures at a sales lunch yesterday, a fired up Gyngell delivered: "On my watch you will not see anything go backwards in the Nine group.

"I've been part of this company my whole life and for the last 10 years we have been trying to build this company into something great. That will continue, I give you that solemn promise."

The magazine arm of the Nine entertainment business announced it will launch two new titles: Womens' Health and Elle.

Of the KP project, Gyngell told news media hounds that he's taken a hands-on approach to the TV biography, from the makers of hit ABC drama Paper Giants - to air after Nine's coverage of the London Olympics in August.

"This is obviously so close to me and we just have to get it right. It's the show I think will be our biggest hit and a story that has everything Australians love: the colour, the characters, cricket," Gyngell said.

His best mate James Packer is said to be "excited" about the production, starring Rob Carlton as his father, with shooting to begin within months.

Local content dominates Nine's lot for the new year, with another mini-series Beaconsfield reliving the rescue of Tasmanian miners Todd Russell (to be played by Lachy Hulme) and Shane Jacobsen as Brant Webb.

Smash hit reality TV series The Block and The Celebrity Apprentice return, along with singer search show, The Voice, and weight-loss challenge, Excess Baggage, which will be hosted by Kate Ceberano.

A new local drama Tricky Business, starring Shane Bourne and Debbie Byrne, will go to battle with Seven's Packed To The Rafters.

Bourne described the show at launch as a family show with a procedural element. The cast also includes Gigi Edgley, Debra Byrne and Lincoln Lewis.

"The show has a very warm heart but we're also debt collectors," he said.

Nine is also bringing back the former Ten hit Big Brother with Sonia Kruger as host.

Hamish and Andy will be back with a series set in London in the lead-up to the 2012 Olympic Games which will also screen on Nine.

Make no mistake, the Kerry Packer mini series is the Main Event for Nine in 2012, and we tip it to be both a massive money maker, and well as act as quite a makeover for Nine, which will help them reclaim the undisputed spot as 'The One'. Knock em for six.

The late, great, Kerry Packer would be proud.