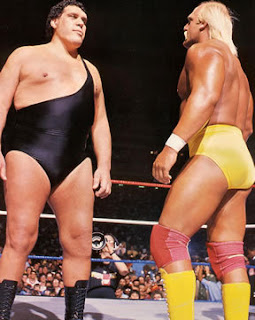 Virgin is in the batch of the first casinos to get this amazing slot game. PartyCasino.com is tipped to also host the pro wrestling themed game.

The new wrestling slot game is a Microgaming flash casino game that is based on the iconic World Wrestling Entertainment star Andre the Giant. It has been launched on the QuickFire platform and is fully licensed by CMG Worldwide.

The biggest pay out a player can win from this game is 5,000 coins and this occurs when five matching symbols appear on the same pay-line. Players can then multiply their winnings by playing a game of Hi or Lo with cards.

The Andre Goes Wild feature round allows the wild symbol to expand to cover all three positions on the reel. This will only occur if the expansion results in a winning combination. The wild symbol only appears on reels 2 and 4 during the game.

Opponents include Flame Bro, Jimmy Iron Legs and Voltage Van Zandt. No, Hulk Hogan or Jake "The Snake" Roberts are not in the game, but we hear both of these wrestling icons are interested to have their own slot game, and Hogan's wish will be coming soon later this year.

The Andre the Giant slot game is available to play Virgin Casino right now and Virgin offer some of the best online casino bonuses on the planet so ring the bell!

*Andre The Giant fans may also like The Incredible Hulk online slot. Hulk Hogan purchased the Hulk naming rights to use "The Incredible Hulk" from Marvel Entertainment in a multi million dollar deal approximately 20 years ago.

Wrestling News Media
Posted by Global Gaming Directory at 2:46 AM