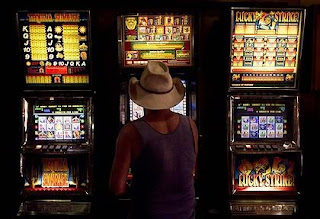 Australians are still widely believed to be the biggest and most passionate gamblers in the world, according to new research that has came to light. Gambling reform proposals have triggered the findings. Media Man and Gambling911 have previously covered the passion and spending habits of Aussies, and today we offer up further detail on the world's biggest gamblers...

We've been telling you a few years now that Aussies are the biggest gamblers, and now more proof of this bold claim has arrived.

The latest issue of The Economist hit out desks and they also rank Australians as the world's biggest gamblers per capita, spending the equivalent of €902 ($1208.75) each last year.

The report states "Australia has led for the past decade, since we started doing this, and has always been well ahead of the other nations," advised Joel Keeble of H2 Gambling Capital, which provided the data.

Ok, first you have to basically ignore the stats anomaly that is Singapore...both their new casinos nearly match the famous Las Vegas strip in the U.S in terms of the gambling spend...the next closest competition for down under in Oz is Ireland, which spent less than half as much on gambling.

EGM's - Electronic gaming machines...including slots / poker machines, account for most of the lead lead. They also pointed out that Aussie's love to engage in a wide range of betting activity.

Not just slots, pokies, horses and football... the state of the Australian economy..bets on next month's interest rate decision by the Reserve Bank after the commission dropped attempts to ban the practice.

Centrebet was offering punters a $1.12 return if interest rates remain unchanged and $26 if they are cut.

The corporate watchdog didn't approve on the grounds that this amounts to trading in derivatives without a financial licence.

A report by the Productivity Commission stated $19 billion was spent on gambling in 2008-09, $12 billion of it on pokies aka one armed bandits.

The commission stated up to 40% of the money spent on the games comes from problem gamblers...a $5 billion hole on an estimated 90,000 people. Clubs Australia and many experts in media do not agree with the figures, starting the report was bias.

Betting agencies such as Centrebet has the Coalition as more likely to win the next federal election at the time of press, but Gillard will find it interesting that she is tipped by punters to lead the Labor Party to the election.

We prefer the slots and poker over political betting, but to each their own.

A Media Man spokesperson said "We have believed that Australians were the most passionate and biggest spending punters on the planet for years. The new report is further proof. Aussies would even bet on pro wrestling matches if odds were available, even though winners are predetermined. Two-Up, betting on two flies crawling up a wall, Aussies will be on anything and big".