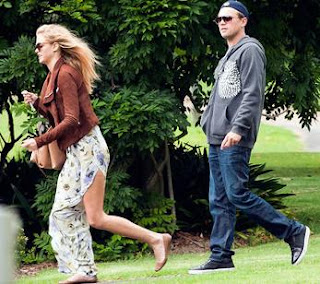 A number of the world's most famous and talented Hollywood movies stars (and social and community entrepreneurs) have recently been spotted on Australian soil, in 'Sin City' Sydney no less. Who are we talking about. Just Leonardo DiCaprio and George Clooney.

These boys are fast and hard to nail down, with both the ladies and news media we understand, so by the time you read this, Clooney might be back to Hollywood in the U.S and 'Our Leo' (affectionate) might have hopped a lear jet back to the States, or maybe he's hiding out back at The Star (ex Star City Casino), where 'Georgy Boy' (affectionate satire) has also been spotted.

Both DiCaprio and Clooney have a thing for casinos. DiCaprio has played quite a bit of Hollywood Poker in his time, getting some major headlines in media including TMZ, as well as did the Rounders poker movie back in 1998. Clooney of course played Danny Ocean Ocean's Eleven (and 12 and 13). Movie and history buffs will be interested to know that in the 1960's version of Ocean's Eleven Danny was played by Frank Sinatra, and he was joined by four other members of the original Rat Pack: Peter Lawford, Dean Martin, Sammy Davis, Jr., and Joey Bishop.

Ok, back to matters at hand in Sydney... 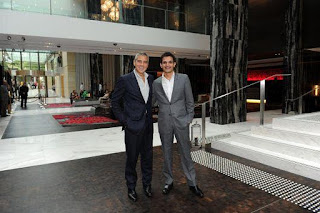 Clooney was in town last week doing his talk at Darling Habour Convention Centre (the one where people paid up to $1100 a ticket). His girlfriend, former WWE wrestling diva Stacy Keibler, did not come. It's not like they are married and have to be side by side 24/7. Keibler is understood to be more keen on a full time commitment type of thing than Clooney at this stage of the game.

Being a bit of casino fan, Clooney made time to meet with The Star’s managing director, Sid Vaikunta at The Darling hotel, where George Clooney was the hotel's virgin (first) customer to stay in the hotel’s new luxurious penthouse suite. The Darling is 'Sin City' Sydney’s latest and greatest five-star boutique hotel and is a paramount part of The Star’s $870 million master plan which is focussed on expansion, refurbishment and The Star being known as a premier Australian integrated hotel - casino - resort and entertainment hub, comparable to the best that Las Vegas and Macau have to offer. The Star and The Darling want their casino whales, but they are also happy to have dolphins and regular punters. Celeb, casino whale, food lover, poker professional or just passing by - The Star wants you!

DiCaprio continues to enjoy Sydney. About a month ago he celebrated his birthday party at Kings Cross, followed by a fantastic afterparty.

For about a month Leo was hanging out with Blake Lively, but that particular blonde is currently in New York, so it wasn't her at the Vaucluse House park surroundings.

Yet another lucky blonde was caught walking around with Leo, this time in the grounds of the historic Vaucluse House in Sydney.

It's handy for Leo, since he's doing some of the Gatsby movie shoots at Fox Studios, Moore Park, and Leo's also hired out some private digs at Vaucluse.

For the record it was not Carey Mulligan who was spotted walking around the pack with Leo.

The blonde was not the bikini-wearing brunette who was paped with Leo back in October after a spot of paddle-boarding at the rented waterfront mansion.

A well connected source tells us that there's a certain group of models based in Sydney who all share a bit of time with Leo. Sort of a personal introduction kind of thing. Aussie models Alyce Crawford and Kendal Schuler are understood to be in the thick of the action. Lucky girls.

The star of the past couple of Spider-Man movies (and keen Hollywood Poker player) Maguire, has kept things very quite in recently weeks. He's been spotted driving and taxi-ing around Sydney, but is not talking or doing photographs with fans we hear. We haven't even seen him at The Star's gaming room. Maguire is understood to be enjoying time with his family when he's not busy on the set of The Great Gatsby.

The boys were all offered rooms at The Stars 'The Darling', and all accepted, but they are also understood to have also spent time elsewhere in Sydney.

In the meantime, we understand that James Packer owned Crown Melbourne aka Crown Casino, is also keen to see more Hollywood stars stay at their fancy Crown Towers. That's where the likes of Tom Cruise and Katie Holmes have also enjoyed the five star accommodation. The Melbourne venue will also see the Aussie Million Poker Championship come January 2011, and Packer's poker tourney men would be keen to see Leo and George in their celeb poker games. Packer is also overseeing the revamp of his Western Australian complex, formally known as Burswood Entertainment Complex, and now known as Crown Burswood. In any event, Crown is keen for more star power and world class attractions, plus of course casino whales aka "high rollers".

Jay Gatsby, F. Scott Fitzgerald and maybe even the late J. Edgar would be proud of the cat and mouse games that Clooney, DiCaprio and Maguire are playing with the Australian media.