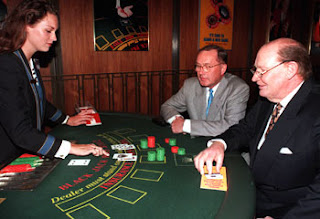 Want to try your luck at a casino? ... Land based or online - there's all sorts of options out that, but first here's some real life stories regarding whales aka VIP high rollers at casinos, the racetrack and elsewhere.

PS: how about those Aussies - they will bet on anything won't they. World's biggest gamblers we heard.

Zeljko Ranogajec – Bookies beware! Allegedly, the world’s biggest gambler is an Australian billionaire of Croatian descent. After studying law in Tasmania, Ranogajec got a job in a casino where he learnt the tricks of the trade. Starting with an initial stake of hundreds, he went on to win millions on casino betting before turning his attention to horses. He now employs a full staff to compare odds and find him the best bets, putting around $1 billion a year on races around the world.

Kerry Packer – Staying Down Under, the late Kerry Packer was the media-mogul who was a thorn in Rupert Murdoch’s side – and a prolific gambler. This was the man who would happily walk into casinos and wager millions, supposedly losing $28 million in three weeks of gambling while in London. Another time he lost $15 million on the roulette tables, the staff saying he walked out with "no regrets". However, on his better days he has won up to $7 million in one casino betting session. There’s even a legend that Packer made a bet of $100 million dollars on the toss of a coin, but his opponent backed down.

Akio Kashiwagi – Known as ‘The Warrior’, this Japanese businessman became a casino legend before meeting a violent end. A master of baccarat, he regularly wagered $200,000 a time in US casinos, once winning $6 million in one night. However, he wasn’t always so lucky; he died in 1992 after being stabbed 150 times with a samurai sword while still owing casinos millions.

Archie Karas - Perhaps the most extraordinary of recent legendary streaks is possessed by Mr. Archie Karas, a Greek immigrant, who in 1992-1993 had one of the greatest runs in Vegas history. Starting with a borrowed stake of ten thousand dollars, Archie went on a rampage of poker at Binion's Horseshoe, defeating 15 of the world's greatest poker players in head-to-head competition, including World Champions Chip Reese, Stu Unger, Puggy Pearson, and Johnny Chan. When he ran out of poker competitors, Archie headed to the Horseshoe's craps tables where he won millions more. At one point in his run, Archie possessed all of the Horseshoe's $5,000 chips -- over 11 million dollars worth. When the run was over, Archie was up over 17 million dollars between poker and craps, all at the Horseshoe.

Betfred vs Betvictor – The names behind two of the biggest high street bookies were involved in what may have been the biggest sports betting wager in British history. Fred Done of Betfred fame and Victor Chandler of Betvictor bet on the outcome of the Premier League in 2005. Fred and Victor supported Manchester United and Chelsea respectively, so they wagered £1 million, as you do. It was Chelsea who came out on top and Done paid up in one of the best bets we’ve seen; what could be better than two sports betting giants walking it like they talk it?

Steve Whitely – Arriving by bus with a free ticket to watch racing at Exeter, 61-year-old heating engineer Steve Whitely turned a couple of quid into millions back in March last year. He didn’t bother to compare odds or make an effort to find the best bets, he just used his two pounds to make a Tote bet. A few hours later and he was minted after winning the jackpot when he correctly predicted all six of the winners. So, what is Steve’s sage advice to budding punters who want to win millions? “I like racing, yeah, but I don’t know nothing about it, do I?” Cheers Steve.

David Walsh - Not a great deal is know about this Tasmanian - Australian, but he founded MONA - (Museum of Old and New Art). Australian press has described him in a few colourful ways, such as - "multi-millionaire professional gambler and one of the nation's leading art collectors - dismisses himself as "just a privileged guy with a megaphone". He might be right. But the world is about to discover just how wonderful, disturbing, beautiful and occasionally challenging that megaphone is". In the second year of his science degree at the University of Tasmania, he was asked by friends to develop a model that would enable them to win at blackjack in the nearby Wrest Point Casino. When he discovered that the scope for winning at card games was limited he dropped out of his degree and, for most of the ’80s and early ’90s, spent 100 or more hours per week developing a mathematical model that would enable him and his partners to win at other forms of gambling, especially horseracing. This he now pursues on a large scale in a number of countries. There is a network of people involved in Walsh’s outfit, most notably his business partner of 30 years, Zeljko Ranogajec. Walsh met Ranogajec at university where the latter studied law and economics before he too dropped out to pursue a career in gambling. Walsh describes Ranogajec as a “relentless motivator and a loyal friend” who, despite not sharing his interest in art, has provided financial support for his collecting mania “whenever my cashflow dried to a trickle”. As Walsh inelegantly puts it: "I am throwing the shit, he is happy to be the fan. And he doesn’t even like the shit."

Australian Sports Entertainment
Posted by Global Gaming Directory at 11:08 AM