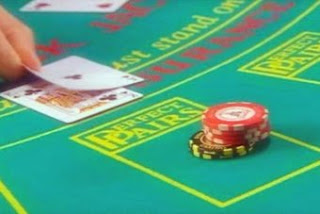 The Australian casino (or gaming) wars have got to a whole new level. It's Packer's Crown VS Echo Entertainment in an almost 'State Of Origin' type battle for the bulk of Australia's land based casinos. One that will take place in a boardroom, rather than on a football field, but make no mistake - it's war.

But, there is no war but peace between Crown Limited and NSW Premiere Barry O'Farrell.

The New South Wales Premier Barry O'Farrell advised he is very pleased with plans for a second Sydney casino at Barangaroo.

It's a given that Packer has been watching the success of Echo Entertainment's The Star, which overlooks Sydney Harbour - but has recently got itself into a few scandals.

Mr O'Farrell says the proposal for a second venue would bring jobs and tourism to Barangaroo, however it would need to achieve regulatory approval before moving forward to development.

John Lee from the Tourism Transport Forum says it would add life to the area.

"You only have to go to Melbourne and see that area around the Yarra River, yes there's Crown Casino there, but there is also movie cinemas, bowling alleys - there's all sorts of things that entertain people when they go to the precinct," he said.

"It's actually a place now, or a destination that people love to go to."

Currently the law allows for only one Sydney casino licence until 2019.

"There shouldn't be a back door deal between the Packers and the Premier - this should be a matter of public debate," he said.

Packer and his team have a history of getting things done... perhaps move than that of say Prime Minister Julie Gillard.

The NSW Premier, Barry O'Farrell, has embraced plans by James Packer's group for a hotel and second Sydney casino at Barangaroo on land set aside as playing fields for office workers.

On Friday Mr Packer's casino group, Crown, advised Mr O'Farrell that Crown wanted a second Sydney casino as part of a hotel and restaurant complex in the centre of the harbourside site, which the Barangaroo Delivery Authority says is intended for "civic, educational and recreation spaces".

Mr O'Farrell said: "I think it's an exciting proposal which could add extra life to Barangaroo, give Sydney another world-class hotel, generate jobs and boost tourism."

The plan also involves building a 5 star hotel well north of the proposed commercial precinct, ensuring guests on upper floors have unobstructed views of the Sydney Opera House and the Heads.

"It's the sort of tourism-related investment we want in Sydney but everyone's aware there are a range of regulatory approvals needed before it could proceed," Mr O'Farrell said.

Those approvals include permission from government bodies for a second Sydney casino because the law now allows only one licence until 2019.

On Friday Crown increased to 10 per cent its stake in Echo Entertainment, which owns the Star casino, and has sought permission from regulators to increase its stake further.

If Crown Limited can gain control of the Star, its executive chairman, Mr Packer, could in fact pursue his plan for a Barangaroo casino to operate under an extended licence for the Star.

He has flagged that such a casino would not need poker machines and could simply have gaming tables, of which the Star can have an unlimited number.

As well as approval for a second casino, Crown Limited or another developer would need the government to change planning rules for the site which now restrict any building to 30 metres high and allow only 60,000 square metres of development in the whole of Barangaroo Central.

Last week a US landscape architect, Peter Walker, who has been retained to design Barangaroo's headland park, revealed that his plans included open playing fields for office workers, similar to the Domain on the eastern side of the central business district.

He has also proposed an outdoor space or amphitheatre for concerts in the central area of Barangaroo, which is proposed as a transition between the commercial towers in the south and the headland park in the north.

Mr Packer's plan to expand the Crown chain beyond Melbourne is part of a campaign to attract wealthy Chinese gamblers aka "Oriental whale VIP high rollers" to Australia's shores, he told the newspaper.

“I want to build one in Perth and one in Sydney to go with what we have in Melbourne. It puts these cities on the map."

Mr Packer's comments come after Crown spent more than $250 million lifting its stake in Echo, which owns The Star casino in Sydney, and Jupiters on the Gold Coast, to 10 per cent, from 4.9 per cent previously.

Echo rejected Mr Packer's call for representation on the company's board.

*the writer is an investor in Crown Limited, Network Ten and Virgin Enterprises