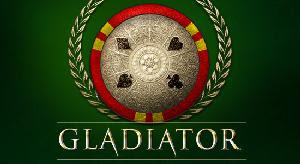 The more days you earn points on, the bigger your prize. There’s up to $4,000 in cash to be won and anyone who wins a cash prize will also claim a seat in a $25,000 freeroll, giving you even more chances to win.

Finally, we've added a massive incentive for the most dedicated players. Earn 1,200 points on 30 days and you’ll win a WPT package worth $8,000 which you can use for the event of your choice. With March having 31 days, you have an extra day's rest — vital for those dedicated to reaching the very top prizes.

Gibraltar – 23rd February 2012 – ‘The Gladiator’ returns to PartyPoker.com for the month of March and, as ever, only the strongest survive in the online colosseum! In new twists, however, the popular promotion is more accessible than ever with the daily points target now starting at just one point - as well as more appealing to those who want to play a lot with ambitious new targets for the most dedicated players.

“The premise of ‘The Gladiator,’ is simple, the more days you earn points on, the bigger your prize. There’s up to $4,000 in cash to be won and anyone who wins a cash prize will also claim a seat in a $25,000 freeroll, providing even more chances to win. We've also added a massive incentive for the most dedicated players. Earn 1,200 points on 30 days and you’ll win a WPT package worth $8,000 which you can use for a WPT Main Tour event of your choice. With March having 31 days, you have an extra day's rest — vital for those dedicated to reaching the very top prizes.”

“For the players that want to push themselves even harder there is an exclusive elite target. Players who earn 1,500 points on 40 days between 1st March and 15th April will win a huge $15,000 WSOP* package**.”

You don’t even have to earn points on consecutive days: we’ll just count up the number of days where you made the targets during the promotion.

Players can keep updated on how many points picked up so far in ‘The Gladiator’ by checking their PartyAccount. Points are not removed from player accounts following the promotion – they all count towards Palladium VIP targets. Step into the arena from 1st to 31st March for a month of exciting poker action where you could emerge with prizes fit for a champion.

*World Series of Poker"® and "WSOP"® are registered trademarks of Caesars Interactive Entertainment, Inc. No license, affiliation, sponsorship or endorsement is claimed, or should be inferred from the use of these trademarks here. We are not licensed by or otherwise affiliated with Caesars Interactive Entertainment, Inc. or the World Series of Poker® in any way.

American casino equipment manufacturer Shuffle Master is expected to purchase the Ongame Network from online gaming giant bwin.party, according to a report by the UK’s The Sunday Times. The move is likely being made by Shuffle Master as a way to position itself when and if online poker is legalized and regulated in the United States.

The Ongame Network has been on the auction block for a year, a casualty of bwin’s merger with Party Gaming last March 31st. The network was purchased back in 2005 by bwin for £474 million, but that was pre-UIGEA and pre-Black Friday, two dark days in online poker history that have significantly changed the valuation of Ongame. Now, the deal with Shuffle Master looks to be for a mere £13 million ($20 million). Prior to the completion of the bwin/Party union, a bwin spokesperson said that the Ongame Network was considered a “surplus asset” and that it was “no longer needed” by the combined company.

The Ongame Network currently ranks as the 6th largest online poker room network/room in terms of cash game players, according to PokerScout.com. With a seven day average of 2,150 players, it falls just behind PokerStars.it (2,250) and just ahead of Winamax.fr (2,100). PartyPoker, which has remained separate from Ongame, ranks 2nd with a seven day average of 4,750 cash game players.

The problem Shuffle Master will face, however, is that the Ongame Network will likely not be as large after the purchase as it is now, although that is probably reflected in the purchase price. The headline room of the network is bwin.com, whose customers will almost certainly stay with bwin.party after the sale. What remains to be seen is what will happen with the other rooms on the network, particularly Betfair, the best known room after bwin.

Shuffle Master is best known for its automated card shufflers, installed in gaming tables, including poker, in casinos all over the world. The company also operates Shuffle Interactive, a division which offers casino games on a variety of platforms, including PC, Mac, Facebook, iOS, and Android. The games can be licensed by online casinos.

Though Shuffle Master and other American gaming companies (such as International Gaming Technology, which bought the Entraction Network for $115 million last May) are making moves under the expectation that the online poker market will open up in the United States, it does not appear that that will happen until at least next year. As we reported this weekend, the disappointing news first came from reliable Las Vegas Review-Journal reporter Howard Stutz, who tweeted, “One Wall Street analyst opinion: Internet poker legalization not being attached to the payroll tax bill means the issue is dead for 2012.” It is not completely out of the question that something could get passed this year, as there are slight hopes that a poker rider could be attached to the Obama Administration’s jobs package or the upcoming cyber security legislation, but those are not strong possibilities. (Credit: Poker News Daily)